Since I last posted about a Linux distribution it's been a while and it was all about Arch Linux. Well, four years later it's again about Arch - more or less: Manjaro Linux. This distribution is based on Arch Linux, is completely binary compatible with it's ancestor but maintains it's own repositories.
During the last couple of years I mostly kept Debian based distros running on my laptop (still this one :-) ), sometimes Debian itself and sometimes Ubuntu. I did not have the time to go through the Arch Linux installation routine which - by my last post you might have guessed - can be a little daunting. However, I do think that Arch's "pacman" package manager and their build system is one of the finest out there. This is where Manjaro comes in handy: it provides a live system with a GUI installer which doesn't take more than 10 to 15 minutes and it's all done.

So, what are the differences between Arch and Manjaro? OK, first of all the installer of course. While you learn a good deal about how Linux is working when installing Arch it takes some time and not everybody is interested in this kind of in deep knowledge (though I hardly understand how you could NOT be interested in that). With Manjaro you download the iso file, burn it to DVD or copy to USB stick, boot it up and start the installer - which pretty much asks the same questions as any other GNU/Linux installer, i.e. Ubuntu's "ubiquity". Then reboot and you're done.
Second, Manjaro - as Arch - is a rolling release distro. You receive updates all the time and do not need to reinstall a new release. In contrast to Arch releasing a new package version once it's ready, Manjaro is releasing "update packs". They do some testing and then release a bunch of updated packages at a time. This should improve stability (though I never had any problems with Arch's stability). You should check Manjaro's forums in case there is any manual interaction needed during an update. If there are some really critical updates they will of course release those as soon as possible.
Third, Manjaro does provide a graphical package manager called "pamac" which works nicely: 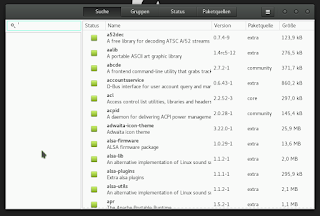 Fourth, Manjaro maintains a whole bunch of different kernel versions and you are free to run any of them.
Besides those four I don't see big differences - you can even use Arch's community based repository AUR with Manjaro!

As already mentioned above installing Manjaro Linux is a peace of cake. Download the latest iso. The default is an XFCE (which I opted for) or KDE edition, but there are also community editions with all kinds of desktop environments. Now verify the downloaded file

and burn it to DVD or copy it to an USB stick. Boot it up, press F2 to select your language and choose 2nd boot entry "nonfree" if you like/need proprietary drivers. Run the installer, answer a few simple questions (just the usual stuff: language, location, keyboard, disk layout, user, etc..., see their installation guide here). Once you boot into your new installation chances are some updates are waiting already. In my case I first needed to update the manjaro-keyring package and after that there where some 500MB updates available. I always liked the pace in which pacman is running updates. It only took a few minutes and as an updated kernel came along I needed to reboot. Be aware though that you should read the news first before updating! It might not run this smooth all the time!

If you've chosen the "nonfree" boot option with the installer image all proprietary drivers should already be installed which in my case means I already got the Nvidia drivers running. In order to get a nicer boot screen I tend to edit /etc/default/grub by setting GRUB_GFXMODE=1280x800. Then of course don't forget to write the config: 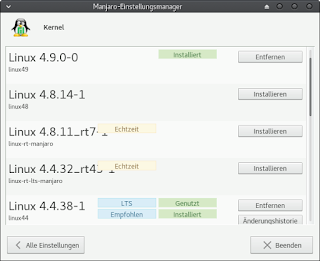 As you can see (and speak German) it's installed but I'm not running it. Reason is that the nvidia module is not loading with kernel 4.9 and you're left with a terminal upon reboot... This problem seems not to be Manjaro related but it's an upstream bug. So I was waiting for an updated Nvidia driver which came on December 23rd with a new update pack - working fine! However, remember to always keep a stable & working kernel installed! ;-)

Language files
Having "Manjaro Settings" already open you might want to take a look at the language packs: it lists any missing language files and installs them automatically (i.e. for Firefox, Thunderbird, Gimp, etc.).

Firewall/Security
Another thing I tend to do is activating a firewall. As Ubuntu, Manjaro comes with "ufw" and I guess for most cases this should do the trick:

You may also run "gufw" which makes it quite easy to add/modify rules.

System time
Let ntp do the job of keeping your system time accurate:

I found that ticking the option in Manjaro settings will not work unless you invoke the above command:

While playing with tune2fs command I noticed that your user is member of group "disk" - which I don't think is really necessary. You might want to consider removing yourself from this group and making use of sudo for any required disk device operation then:

If you find that inconvenient later on you may add yourself to this group again by replacing "-d" by "-a".

Anyhow, if you need help the first thing I'd recommend is going through either Manjaro's Wiki and/or Arch's Wiki - they are both very well written. So, have fun!