Still I like to make use of my WBT-201 GPS logging device by Wintec. (I might have mentioned this before ;-) ). Wintec does not provide software for Linux and the latest version for Windows is from 2008. However, there still is this nice peace of software by Jonathan Hudson called "GTK G-Rays2". He recently released a 2.x version as source, now supporting GTK3 but doesn't provide packages for Ubuntu anymore. So based on his former 1.x packages I did my worst and built them for Ubuntu 12.04. I also built Debian packages for Debian Squeeze, but of course they are still version 1.x based.

If you'd like to install GTK G-Rays2 for Ubuntu 12.04 just add my Launchpad ppa and go ahead:

You can find the Debian packages here (the archive contains a signed md5sum file, see my key here):


You might want to install gpsbabel as well (this already comes with Debian's/Ubuntu's default repositories):

Before you can make use of GTK G-Rays2 you need to put a new udev rule in place - otherwise only root would have access to the device. So, create a file called

Then restart udev (or simply reboot), plug in your WBT-201 and run GTK G-Rays2!

Here's a screenshot (without device attached): 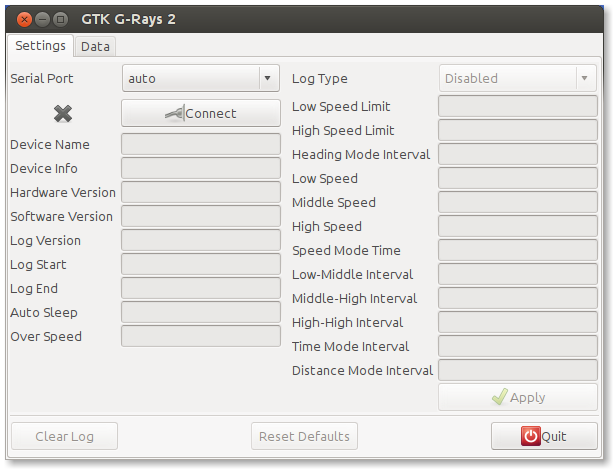 Credit goes to Jonathan Hudson for writing this nice tool and providing packages for Ubuntu 10.10. All of the above is based on these - thanks!
Written by gerrit um 10:45 PM