I finally did it and I'm strong enough to admit: I got myself a MacBook. Gone those years I made fun of Mac users? Well no, I guess not, but MacOSX isn't that bad after all! ;-) The main reason why I bought the MacBook was curiosity. As I got quite acquainted with Windows over the years, followed by Linux and (at least to some point) Solaris, I wanted to know how MacOSX would "feel" like. So I got this MacBook: 2,4 MHz Intel Core 2 Duo, 2GB RAM, Intel GMA X3100 integrated video controller and 160GB hard disk. Though Apple hardware is of good quality, I still think it's way to expensive - but nobody forced me to buy it... ;-)


Powering up this machine for the first time, I was asked a few simple questions: language, name, address, etc., it registered with Apple (if Microsoft would dare to do so...) and finally offered to make a picture with the built in webcam to use as avatar. Then I was automatically logged in. So far so good. From reading a little at Apple's website I knew how to update, so this was the first thing I started. It took a while as there was some kind of major service pack to be installed, which updated MacOSX 10.5.x to 10.5.y - along with some application updates. The update manager already warns at the beginning, that it would be necessary to reboot afterwards. This update and all that followed since went very smoothly. Once logged in again, I took a look at the "Systemsettings". There are at least two things which I altered right away: by default the firewall allows all incoming traffic (and I don't think this is a good default setting) and I turned off auto login.
Then I played a little with the pre-installed stuff: Safari (browser - nobody complains about Apple integrating a browser in its OS, like they do with Microsoft...), Mail, iPhoto (iLife 08 was also pre-installed), iTunes, iChat but my favorite would become "Applications -> Utilities -> Terminal".
I have a few "killer" applications which I like to run on every OS: Firefox, Thunderbird, wget, GnuPG, and OpenOffice (though I rarely use it). Luckily, there are binaries available for most of them.

Installing Firefox, Thunderbird and OpenOffice is as easy as downloading the *.dmg images, double-clicking them and dragging the icon to the "Application" folder - that's it. Getting GnuPG and wget running involves compiling from source. Well, this doesn't seem to be the standard way of installing apps on a Mac, but thanks to MacOSX' Unix roots it's very easy - and of course no problem for a Linux user! ;-) There is one prerequisite though: you need to install Apple's Xcode tools. I guess installing the Unix developer tools would be enough, but I went for the default install with some of the GUI developer tools included. To get your hands on the Xcode Tools you can either use the DVDs which came with your Mac or download the latest version from Apples Developer Connection (I'd recommend the latter - you need a free Apple Developer account though). Once installed, download the source of GnuPG/wget, extract the tar  files and simply do

All files will end up in /usr/local which is fine! (Hint for Snow Leopard users: you need to invoke "./configure --disable-asm" to make GnuPG compile cleanly.)
There is a nice project called MacPorts which makes installing lot's of open source apps quite easy by providing a BSD-like ports system. Of course, this means compiling every application from source which might take some time...

There is one other applications which I like to run on every OS: Mp3tag. It's the best "ID3 tag/Ogg comment/FLAC metatag/whatever"-editor I've found. It's a Windows app though, but runs nicely with Linux using wine. Thanks to it's Unix roots, there are ports of wine for MacOSX, too, kindly provided by Mike Kronenberg.

The first time I wanted to burn a CD iso I had to ask Google to find out, how it works on McaOSX: coming from Windows/Linux I'd fire up my favorite burning application and on I go! But who would guess you need to start the "Disk Utility" to burn isos?

I was glad finding the Terminal.app which helped me a lot at the beginning (like copying hidden files...), though I was faced with another problem: where the heck is the pipe symbol ("|") or back-slash ("\") hidden??? (Yes, Google is our  friend: "alt-7" and "shift-alt-7".) But most things just work on MacOSX. Even using my Nokia N95 as modem device via bluetooth was just a few clicks away!

When it comes to iTunes I have to say this application is absolutely "no-no"! If you don't have to use it just don't. I've spent quite some time getting rid of the proprietary tags it has written to my mp3 files without asking for permission or even telling so!! I'm not quite sure what those tags would be good for (maybe some information for iPods etc.?), but I tagged my files very carefully and I don't like them to be altered by some crappy application. Besides that, iTunes is very limited in its playback capabilities: no ogg or flac playback. (By the way, Windows Media Player is in no way better than iTunes: it changes file attributes of my album cover jpg's to "hidden" and also cannot play ogg/flac files...) So, I needed an alternative. Of course VLC is kind of a swiss army knife when it comes to multimedia playback and I always install it (it's open source and available for nearly every OS) and it would do the job. But there are to others, too: Vox, beeing a small but very nice little audio player and Songbird, which is more iTunes-like. Both don't alter your media files and leave you a wider range audio formats. For ripping audio CDs to various formats Max will do fine.

I even couldn't resist in getting my hands on the next MacOSX 10.6 aka Snow Leopard. Doing a clean install of MacOSX is quite easy, but takes some time... (You could easily do five or six installs of sidux during this time... ;-) ). 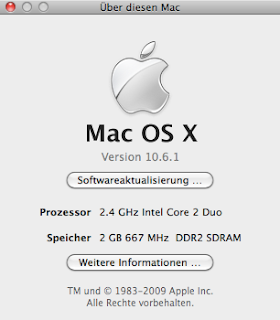 One of the biggest differences between Snow Leopard and it's predecessor Leopard is the amount of 64bit code. Of course it's kind of nice, but you won't notice on your average MacBook. Besides that I didn't notice too many differences, but Apple concentrated more on improving the existing than inventing new features. But some things slipped through... Though already outdated on Snow Leopard's release and afflicted with serious security issues, the latest version of Adobe's flashplayer was not delivered before MacOSX 10.6.1 update. Of course, users could have updated flashplayer manually through Adobe's website. A bug which even slipped through 10.6.1 concerns connecting to samba shares. Trying to connect to my small D-Link DNS 323 NAS device via samba ended up with an error about wrong password/username. Being sure about the correctness of my credentials I did a little search on Google and found that I was not the only one with this problem... This bug was introduced with 10.6 an not fixed with 10.6.1 - that's a shame! On one of the forums I found a solution (at least it worked for me): typing the password entirely in capitol letters worked...

To me it seems Apple doesn't take security issues too seriously. Security updates to peaces of software which have severe security issues are more or less ignored. Take as example an outdated Java VM or flashplayer. Granted, both are originally not made by Apple but by Sun respectively Adobe, but if Apple provides this software within it's OS they have to take care of updates (especially when fixed versions are already released by the original manufacturer). I.e., Mac users where exposed to severe security issues by having an outdated Java VM installed which - in the worst case - could lead to an attacker gaining control of the host computer. Though Sun quickly released an updated version of Java VM, Apple didn't seem to bother and waited half a year with providing this update for MacOSX... As you can't update Java on MacOSX manually, because Sun doesn't provide Java for MacOSX, you have to rely on Apple to do so. See news on heise security. (Be on the safe side and surf the web with Firefox and NoScript extension!!!)

The default security settings concerning the firewall are bad, too: it's disabled. Why? At least it could be turned on and grant incoming connections only for "signed" (whatever that means) applications. This would be a good compromise between security and ease of use. But turned off?!? I don't get it...

In both - security updates and default security settings - Microsoft has learned in the last years and in my eyes outmatches Apple. I have the feeling, Apple relies on MacOSX reputation for not having any viruses in the wild and thus is immune to security flaws...

Having that said I have to admit I like MacOSX and my MacBook. I guess, if you're an absolute newbie to computers I'd advise getting a Mac. If you don't want to look behind it all you don't have to and things work more intuitive on a Mac - and they do work. If you're used to (please forgive me for this term ;-) ) "real" computers you find the beginning a littler harder, because you just "think" different.
"Switchers" (as introduced by an ad campaign) are people who switch to MacOSX, mainly coming from Windows. In my case this isn't quite true, as I run my Mac aside my Linux/Windows box(es), but of course I was faced with similar problems/questions as "real switchers" (see above). Though MacOSX could never replace Linux as my main OS (I just don't believe in closed source software) I really like it's nice desktop and it's solid Unix base with all it's advantages. Comparing Apple to Microsoft, I can't see the big difference.
If I wasn't so curious about computers and operating systems I might have never gotten a Mac, but now I'm quite happy with it.
Written by gerrit um 6:04 PM