My Creative Zen Xtra (30GB) is a little big so I was up for a new and smaller MP3 player. I decided to buy Creative's Zen (8GB). It's a quite handy device and so far it works good. First thing you should do though is updating the firmware. Download it from Creative's Support website and execute the downloaded file (Windows only...). 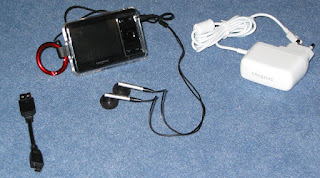 Zen is MTP compatible only which means it's not recognized as mass storage device. Except it's optional SD card, which pops up as a new hard drive in Windows (has to be activated in the player's setup). Speaking of, all media stored on SD card has to be imported manually to Zen's media database. I don't care but some people do not like this fact. Once you get used to navigating through Zen's menus it's quite comfortable. Zen's battery is charged by connecting the player to the computer's USB port, which is bad if there's no computer around. I'd recommend spending some extra bucks on "ZEN USB Power Adapter" (see picture) so you can charge the battery wherever you find a power supply. Another thing I'd add is "ZEN Clear Case" which protects the screen from scratches. I can't say anything about Zen's qualities as video player as I haven't used this feature - and probably won't at all - but as MP3 player it's great!

You should expect Creative adding some quality software with the player... Well, I had major problems after installing it on my up-to-date Windows XP Professional: Windows Explorer frequently crashed/froze. I could only fix this by uninstalling Creative's software. I did some researching around this problem and found I was not the only one. I don't know if it's coincidence, but more then once people with similar problems had some software by Creative running... Maybe it'll work with Vista? So try it, but I'd keep my hands of Creative Software for now! The good news: you don't need it! Windows comes with drivers (hey, it's there "Play for sure" crap!), so just plug Zen into a free USB port and go. To manage your media files, you may use Windows Media Player (of course) or you might choose MediaMonkey or Winamp. I go for the latter, just because of the "old days" where it was more or less the only MP3 software player around. ;-) (I think I have a 0.x version around somewhere...) But clearly, my main goal is getting Zen running with Linux! I found some good howtos here (German) and here. Until now I hadn't had the time, but I'll let you know! :-)
Written by gerrit um 10:28 PM