About two months ago Ubuntu 7.10 aka "Gutsy Gibbon" was released and I couldn't resist... So I first gave the KDE flavored amd64 version of Kubuntu a chance which worked very good. Out of curiosity I recently changed to Ubuntu with Gnome desktop.

Installing (K)Ubuntu is pretty easy. If your system has at least 320MB of RAM download the "desktop CD", boot it and click the "Install" icon on the desktop. When booting from the Desktop-CD, your screen might go blank right after the desktop shows up for the first time. If so, just hit any key and it should reappear. Or maybe I'm the only one who ran into this? To avoid such things I prefer the "alternate" CD which isn't harder to install. I won't concentrate here on installing (K)Ubuntu Gutsy as it's very straight forward and not different to former (K)Ubuntu releases. This post will be about customizing Gutsy and how to avoid/repair some small issues you might run into.

The first thing I do after successfully installing a Linux distro is updating it with the latest packages. With (K)Ubuntu I'd edit "/etc/apt/sources.list" and comment out the installation CD. This way, apt will download all packages from the online repositories. To do so, open sources.list with your favorite editor:


Save the file an update the package list by typing:


I prefer doing the first and probably big update without running X server. So, close all running programs and stop X by


With Ubuntu I ran in first problems here. When configuring "ttf-opensymbol" apt complained about not being able to update the fonts cache:


I knew this bug from my first experiences with Debian Lenny and from Ubuntu Feisty. I don't know why It reappeared, you can read the bug report at Launchpad. Don't worry about it, the update will configure everything else right. I ran into another small issue when first updating Ubuntu: a lot of error messages like


/var/lib/scrollkeeper/fr/scrollkeeper_extended_cl.xml:4568: parser error : Extra content at the end of the document <sect ...>


appeared. This bug is also listed at Launchpad here. The update will work and we'll fix those two issues later. When the update has finished, apt will tell you about some unconfigured packages, mostly related to OpenOffice. Anyway, just reboot:


Upon reboot, login again, open a terminal and type


You will be again presented the above mentioned errors. Open a second terminal and for each directory with "failed to write to cache" type:


again and this time every remaining package should be configured fine.


So far, so good. If you need to install any restricted drivers, like the Nvidia ones, this is the right time. If you're running Ubuntu go to "System -> Administration -> Restricted Manager" (see screenshot below), if you're running Kubuntu you'll find the "restricted manager" in "KDE Control Center". Just check the driver you want to install and it will be downloaded and configured properly. In my case, I installed the Nvidia driver and upon reboot I had Compiz running (only with Ubuntu, no default desktop effects in Kubuntu!). 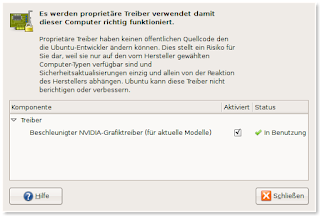 If connected to the internet through a router it may not be considered necessary but I like to install a firewall (or, to be precise a utility to configure iptables). My choice is guarddog. There are other tools as well (e.g. firestarter), but I like guarddog best. Guarddog is a written for KDE so it will pull some KDE dependencies when installed in Ubuntu.

TIP: If you're installing guarddog in Ubuntu, I'd recommend installing and running kcontrol first (of course not necessary if running Kubuntu). As you have to run guarddog with root privileges it'll create some configuration files in your home directory (~/.kde) - and those will then be owned by root. You could change this later with


But I think it's easier to launch kcontrol as it will create those files and they will be owned by you. So, to get it done type ("XX" for your language)


and tweak the settings as you like. Now start guarddog


and configure your firewall. Ready!


and add your boot option to the last line, like


What does that line do? In the future - when kernel updates are installed - update-grub automatically adds <your-option> to the alternative boot option. For now, we add it. Scroll down and look for lines without leading "#". You should see an entry like this (4 lines, I added line numbers to make it clear):


To add <your-option> to "the recovery mode" place it at the end of the "kernel" line:


I think the installer should add all options to all boot entries, but right now it doesn't. Anyway, now you could boot your system even in recovery mode! (Hopefully not necessary...)

The trouble with flashplugin

By the time of writing, the package "flashplugin-nonfree", which provides Adobes Flash Player, is broken due to an update by Adobe. Adobe does not permit others to distribute their plugin, so what the package does is downloading the software from Adobe's ftp site and unpack the plugin to the right places. If you try to install the Ubuntu package at the moment, you will receive an error that md5 sums won't match - which is not surprising, because Adobe provides a new version (9.0.115.0). So, why doesn't the package maintainer just make a new package? Well, this is a little tricky, because version 9.0.115.0 brakes compatibility with Konqueror. There is some discussion going on at Lauchnpad about this issue. I guess, for fresh installs of Gutsy there are two possible solutions, which are also mentioned at Launchpad:


Of course, both solutions leave Konqueror without flash (to be precise, Konqueror is likely to crash) - but that's the curse with closed source software...

I decided to follow the instructions to build a new "flashplugin-nonfree" package and it worked great. I don't use Konqueror for browsing the web, so I don't mind flash not working with it. I'd recommend that way too, because it's the Debian way! ;-) This is what you have to do:

Make sure those packages are installed:
If you're running Ubuntu for amd64, also add:

When all is installed, download the source of the "flashplugin-nonfree" package for Hardy Heron from here open a terminal and change into the directory where you stored the just downloaded flashplugin-nonfree_9.0.115.0ubuntu2.tar.gz.


The exact file name of the package depends on your machines architecture. If you're running Ubuntu for amd64, are to lazy for the above and trust me, you can download my package from here (md5sum: b7d628b11bcdc2547654c73b2c14019a flashplugin-nonfree_9.0.115.0ubuntu2_amd64.deb): Ubuntu Gutsy flashplugin-nonfree package (amd64).

As always, have fun!

EDIT - January 26, 2008:
The new Hardy source files for flashplugin-nonfree seem to introduce some new dependencies which cannot be met with Gutsy. Installing the build package will fail. Installing the plugin from Adobe's website to ~/.mozilla/plugins works - at least I can confirm this for i386.
Written by gerrit um 7:03 PM