I finally did it... I told you, the voices in my head... I couldn't resist any longer... Yeah, I'm weak... Argh, what the heck, so I ordered "Windows Vista Home Premium" at Amazon and installed it. In the following I'd like to share my first steps in this shiny new "World of Vista".

First a little more detailed view on my hardware:
Some of it works great with Vista, some doesn't. I'll come to that later.

Installation of Vista went really smooth and Microsoft finally managed it to make it as easy as most modern Linux distros. No ancient Windows NT blue/white installer anymore. With Vista you'll boot into a GUI right away. Answer a few simple questions like entering registration code or partition to use etc. Only one reboot and two or three more simple questions like i.e. user name and you're set. The whole installation process took about 30 minutes and Vista was running. So far so good. I can say that I'm quit familiar with any Windows version prior to Vista, but I have to work my way through this new version. It's quite different and reminds somehow at OSX. I guess you could compare moving from Windows XP to Vista is like moving from Windows NT 4.0 to Windows XP. Especially the directory structure differs a lot from WinXP.

OK, first thing that strikes the users eye of course is Aero, the new default theme - if your hardware is capable of displaying it. Well, mine is. At first I thought, I'll turn it off, but now I really got to like it and as it doesn't seem to use significantly more CPU, I guess I'll stay with it. Another eye-catcher is the new sidebar. I don't think it's really useful and gadgets are still rare, but looks great! For the time being I'll leave it where it is.

Almost every interaction with the control panel needs your approval. Though the first user account which was created during installation has administrative rights, you'll need to confirm every change to the system. This is called UAC (User Account Control) and is meant to be a security feature. I think it is - as long as you read the messages! I already tend to just click "Continue"... First time you'll probably notice UAC is when running "Windows Update" (which you should). I had to install 12 Updates including a new NVIDIA driver and one for my SyncMaster display. Of course, a reboot is required. After installing all updates I installed the original manufacturer's Vista drivers for chipset (NVIDIA), sound (Realtek) and display (NVIDIA) as well as DirectX9. I read in some forums that the latter may be required by "old" games and Vista already comes with DirectX10. As I plan to play "World of Warcraft" I need those drivers, but if you don't plan to play 3D games it may be a good idea to stick with the windows drivers. Just to be on the safe side.

I finally ended up with the following desktop: 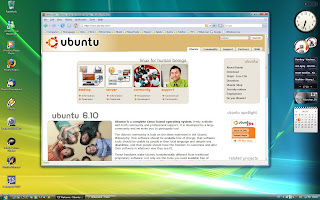 OK, there is already some extra soft-/hardware installed... But - to be continued...
Written by gerrit um 11:12 PM