Back to the roots!

Installing Vista did of course (and not surprisingly) overwrite the MBR so I couldn't boot into Ubuntu anymore. I took this as an excuse for doing a clean Linux install and decided to go for Debian Etch. I downloaded a weekly snapshot from here, to be precise "debian-testing-amd64-kde-CD-1.iso". You don't need to download more than the first CD iso depending on your preferred desktop. Choosing the default "CD-1.iso" will leave you with Gnome as desktop. But you may change your mind later on and install one or the other desktop environment. OK, so download one of the "CD-1".iso's, burn it to CD and boot it!

I needed to boot with a special kernel option (I mentioned that before...), because without "noapic" the Linux kernel won't boot on my machine. To add that option to the installation-kernel I typed:

at the prompt. I was then presented with the default Debian text-installer. Debian now has a gui-installer too, but I didn't try it and don't think it's really necessary for anybody who knows how to press "Enter", "Tab" or "Space"... But that's a different story and it may be a good idea to provide a gui-installer for people who feel uncomfortable installing an OS without using a mouse.

Back to the installation... The text-installer asks some very simple questions very similar to the Ubuntu text-installer (which is of course just a modified Debian installer...): language, keyboard layout, partitioning, user, etc... I was very surprised that the Debian installer recognized the Vista bootloader and automatically integrated it into the newly installed grub menu! After the first reboot - I didn't have to edit grub's "menu.lst" manually, the "noapic" option was added by the installer - I was presented with a working X-server and KDM. So now I'm back to Ubuntu's roots!

Some of the things which work by default in Ubuntu do have to be configured in Debian, but that's very simple. I'll comment about installing Nvidia drivers, 32bit apps and customizing Debian Etch later... 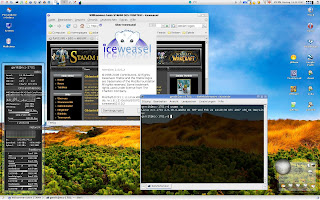