There are a lot of instant messengers out there but most of them are sponsored by big companies like Microsoft (MSN/Live Messenger), AOL (AIM, ICQ) or Yahoo (Yahoo Messenger). There's nothing wrong with that if you don't mind some advertising... As I'm a fan of OpenSource software I'd like to mention Jabber (protocol is called XMPP) here. The server as well as the client software is open source and as far as I know the only limitation compared to other proprietary messenger protocols is the missing support of video chats. GMX and web.de released there own messengers based on XMPP, which means you can use any Jabber client to contact their chat network.

All you need is a Jabber account. A good point to start is the official Jabber homepage. There's a list of servers where you may want to create an account. A Jabber ID looks like an e-mail address: nickname@jabber-server. If all is set you have to decide which Jabber client you'd like to use. There's whole bunch of them and you can find some here. I'd recommend Psi. It's available for all platforms (Linux, Windows, MacOS), easy to use and at least I don't miss any features. If - like myself - you're running Ubuntu with no KDE installed, which is needed by Psi you may find Gajim a good alternative. Or just stay with the desktop's defaults: Kopete for KDE and Gaim for Gnome! When starting one of those messengers for the first time, they'll ask everything to configure your account and you should end up witch something like this: 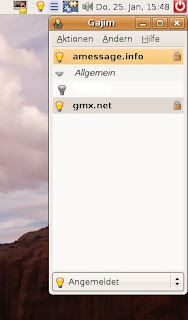 Written by gerrit um 4:56 PM No comments: Links to this post

A few weeks ago I stumbled over Exaile!, an excellent media player for Linux which aims to be the GTK pendant to KDE's Amarok and it fit's great into Ubuntu's default Gnome desktop. If you have Edgy 32bit installed just grab the deb package. Compiling for Edgy 64bit is very easy and quick, so don't hesitate to download the sources. Either way you need to make sure to have some packages pre-installed:

Read more »
Written by gerrit um 10:33 PM No comments: Links to this post

A big grin rushed over my face when I saw BadVista.org. Don't get me wrong, I don't hate Windows, in fact I like it and use it myself. Windows made it possible for thousands of people to use a computer, including me. Well, not because it's easy to use, safe or secure (or cheap) but just because of the fact that it's pre-installed on almost every new computer and it's the first thing the majority of computer users are seeing when booting a computer for the first time. But: Windows is not "easier" to use than any other (Desktop-)OS. But as it's the first OS most users get to know, they might think that the way Windows makes things work is THE way. If you're not interested any further you'd stay with what you know.

For every day work you won't need Windows and in fact, there are only very few apps (mostly games, like Civilization IV or, very important: World of Warcraft!) that make me keep Windows. So, if you're a gamer there's no alternative. But for "every-day-work" I don't need Windows and don't use it. And I think most users would not need Windows. Having that said, I have to admit that I probably will update to Vista... someday... Not because it'll be necessary but just because those voices in my head keep telling me to update everything... It's a curse but I'll have to live with it... ;-)

OK, now back to "BadVista". I think it's a good thing to hear the "other side" not contaminated with MS thinking. There are a few very scary things about Vista, including the fact that USA's NSA helped to make it "more secure" (at least that way you know who's listening) and the integration of DRM (Digital Rights Management). As I like to stay boss of my computer I can't accept the fact that Vista's DRM might like to "know" what's better for it. Windows, being closed source, can't do much to make those bad feelings about it go away.

Keeping in mind that - as well as Microsoft - BadVista.org might not be 100% objective, I'd recommend reading some of the blogs. It's worth it and maybe you think twice before installing Vista and consider an alternate OS!

Written by gerrit um 9:29 PM No comments: Links to this post

Though a little off-topic again (be sure I'll write something real nerd-like about a new Star Trek movie if ever released!!), I'd like to comment on the new James Bond movie. I think it's a real good and entertaining action movie and despite any comment to follow below I do like it! But... THIS IS NOT JAMES BOND!

First of all, Daniel Craig may be a good actor but he's no Bond. I liked Pierce Brosnan a lot as Bond though my favorite still is Connery of course. Besides the title credits and the last minute of the movie nothing really reminds of the former James Bond movies. It has - for a Bond movie - a lot of emotions and I was missing the typical Bond humor. Let's not mention the rather illogical time line: "Casino Royal" is placed at the beginning of Bond's career... with a female "M" who's missing the "cold war"... As far as I know, bond started out with a male "M" as his superior during the cold war, and now the same "M" is at the beginning and the end of his career?? ;-) OK, let's not mention this and it wouldn't bother me even if I considered "Casino Royal" a real Bond movie. It's a bit like "Never say never again". (But the latter should never have been made. Why couldn't they just stay with the original "Thunderball"? - Only my opinion...) Even the title track doesn't sound like James Bond...
I guess I have to watch "Goldfinger" again to see a real Bond! Again: I like "Casino Royal", but don't expect James Bond...
Written by gerrit um 9:41 PM No comments: Links to this post

Ubuntu Edgy is installed - but that's only half the way! Here are some tips and tricks on how to customize your installation of Edgy. As I'm using a rather common system I hope this HOWTO may be helpful for some of you (though it'll be nothing you wouldn't find in the official Ubuntu Howto/Wiki).

By default Ubuntu makes use of "main" and "restricted" repositories only, so first of all we need to add "universe" and "mutliverse". To do that open "/etc/apt/sources.list":


At the top there should be a line which starts with "deb cdrom .....". Place a "#" in front of it. This way apt won't ask for your installation CD each time a package from there is needed, but it'll load it down. I hate playing DJ when installing software. If you're low on bandwidth you may keep this entry of course.
You may now add each repository individually or just add "universe multiverse" to each line which has no leading "#", so you should end up with something like this (no breaks, should be six lines!):

Read more »
Written by gerrit um 10:16 PM No comments: Links to this post