Last week my computer died... I'm writing this using one of my old boxes. I don't know what happened, it just left me with a small bang and died. I think there's something wrong with power switch witch might have caused a short circuit. If you think I'm pretty pissed, you're guessing right...

I'm now looking for a new computer. Just don't know if I buy one from Dell or Fujitsu-Siemens or something like this or if I assemble one myself again... Well, I'll see... It's going to be a pretty hard time not being able to play "World of Warcraft"!
Written by gerrit um 12:59 PM No comments: Links to this post

Email ThisBlogThis!Share to TwitterShare to FacebookShare to Pinterest
Labels: Hardware

As already mentioned, getting Linux to playback DVDs is a little tricky, because in some countries (including Germany) it's illegal to use the needed library. It's OK if you use Windows as your OS and have a commercial software like WinDVD or PowerDVD, but it's considered to be illegal if you have open source software to playback css-encoded DVDs??? I cannot see the sense in paying for a DVD and than have to pay again for a (Windows-)software to play it. I think that comes pretty close of being bullshit...
I found a nice paragraph in a German Ubuntu wiki, so if the language doesn't bother you have a look at it, it's right at the bottom of that page. To sum it up, it seems I'm not even allowed to write a HOWTO on this matter. But I like to quote (not literally) the former mentioned paragraph from the Ubuntu wiki.

It's not illegal to search for example via Googel for a library which enables Xine to play DVDs protected by css. If, by accident, you are lucky and find it just get the rpm (if you use SUSE 32bit) or the source (for SUSE amd64) and install the former or compile the latter (no special options required). If you installed "libxine1" from Packman you would now be able to play "normal" DVDs - at least I heard so.
Written by gerrit um 10:31 PM No comments: Links to this post

As for all major Linux distributions SUSE comes with almost no support for multimedia. At least mp3 playback is possible via Real Player or amaroK if you install "amarok-helix" and choose it as playback engine for amaroK. If mp3 support is all you want, you're all set! But I like to go a little further here.

Almost all you need for this purpose: Packman has it! Just add this repository to smart. From there on are two ways. If you added Packman with the default settings you will get a bunch of new packages the next time you do a "smart update/upgrade" replacing the one's from SUSE by Packman's. There's nothing wrong with this, but I like to stay closer with SUSE. So, when adding the Packman repository to smart I selected "-10" as priority. This way, I can manually choose which packages from Packman I like to install.

If you followed the "-10 priority"-part you now need to install the packages manually. Open the smart-gui and search for the following packages and mark them for installation/removal (packages by Packman have "pm" in their name):
INSTALL:

After those packages and their dependencies are installed you should be able to listen to mp3's and watch most movie formats - with the exception of DVDs... I'll cover that later, as this is a little tricky and in some countries even not legal.
Written by gerrit um 3:54 PM No comments: Links to this post

Recently I couldn't resist installing Gaim2. As there are no rpm's for SUSE 10.1 (you could take a look at Guru's repository, but that would be the easy way!) I had to compile from source. And by the way: it worked! ;-) So, here's a little HOWTO.

First of all get the source (by the time writing it's Gaim2.0.0 beta4) from here and extract it to a temporary directory. Then you need some packages. As I'm using KDE you might already have some of these installed if your preferred desktop is Gnome. Whatever, you need those:
You should also install gstreamer/gstreamer010 and gestreamer-/gstreamer010-plugins to have sound in Gaim. If you never used gstreamer to play sound before (much likely If you're using KDE) play a wave file by typing

Read more »
Written by gerrit um 10:59 PM No comments: Links to this post

Due to the upcoming release of Microsoft's Zune-Player they released a new theme for Windows XP. Looks nice if you like black and it kind of fits to the new Windows Media Player 11 which is also held in black. 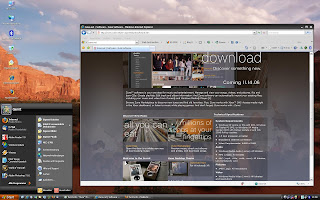 Written by gerrit um 11:48 PM No comments: Links to this post

A short glimpse at "Edgy"

Recently I couldn't resist (those voices in my head told me to...) and give Kubuntu's Edgy a try. I downloaded the desktop install iso for amd64 ignoring the known bug which said that the desktop installer "ubiquity" cannot reuse an existing root partition. I couldn't believe such thing because in Dapper it worked well. OK, this annoying bug does exist... Very disappointing! So, I downloaded the "alternate install" iso and gave it another try. Installation went smoothly but then another bug: logging in and out of KDE makes all mounted partitions under "/media" disappear. You have to "sudo mount -a" to get them back mounted.
Trying to install Klamv, a Qt-interface for clamav, resulted in dpkg-configuration errors which could - unlike in Dapper - not be resolved by just installing any other package afterwards.
Another odd thing is that by default you can't see the "/" filesystem in Konqueror with the exception of your "home"-directory of course and "/media" (if partitions are still mounted...). Maybe that's considered a "feature" and there is a possibility to disable this behavior but I will not try finding out. I'm very disappointed with that release of (K)Ubuntu and hope they'll get it fixed soon. In my opinion those two are grave bugs and shouldn't make it to a final release. I'm going to stay with SUSE and see what openSUSE 10.2 will bring...

Written by gerrit um 11:37 PM No comments: Links to this post