As already mentioned SUSE's ZENworks package management doesn't do it's job and YOU (Yast Online Update) isn't really better. The alternative is smart. If you followed my instructions from "Installing SUSE Linux 10.1" you skipped both registration and update configuration. You may do so now either via Yast or by opening a console, becoming root and typing "suse_register -n" - maybe it works, maybe not... But you don't need it. Anyway, I'd recommend getting smart from here (there' a link to rpm's for SUSE 10.1) and installing all three packages from console by changing to the download directory and typing


You should use the "U" parameter (which stands for "update") if you installed the version of smart which came with SUSE. That is the recommended way because all dependencies (needs some python stuff) are already installed then. If you haven't installed smart during initial installation of SUSE you may try installing the packages via "rpm -ihv smart-*.rpm" but rpm won't resolve dependencies this way.

A little "nerd-off-topic", but as I'm a big fan of Depeche Mode since the days of "Master and Servant" and "People are People" back in 1984, I'd like to mention that they recently released a new single called "Martyr" which is not featured on their last album "Playing the Angel". The song sounds a little more electronic than most of the songs on "Playing the Angel" (except for "Precious") but would have easily fitted on it as well. Though I think (after listening to it a few times) they had better songs, it's good DM stuff and if you like Depeche Mode, you'll certainly like "Martyr"! 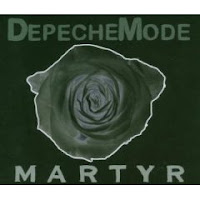 The one thing that disappoints me are the remixes of their singles. Until the mid 90s they really had some great remixes or extended versions. Just think of "Are People People", "Behind the Wheel" or "Walking in my Shoes" - to name a few. But nowadays all their remixes sound crappy... They're always kind of dancefloor tuned and hate it! I think those remixes have nothing to do with the kind of music which Depeche Mode stands for. Well, just my humble opinion...

"Martyr" will be featured on the forthcoming Album "The Best of... Vol.1". I don't know if it's themselves or their record company who pushes out a "Best of" or other kind of DM compilation in between new albums. OK, of course I gotta have it... Maybe that's why they're releasing stuff like that? ;-)

Mozilla Firefox 2.0 has just been officially released! I'm using Firefox since the days of version 0.4 where it was still called "Phoenix" and I like where it's going to. So, I just installed the Windows version and my first impression: doing great as always! Before installing I removed the previous version and renamed the profile folder in "C:\Documents and Settings\<username>\Application Data\Mozilla" to "...\Mozilla_old". I think it's always good practice to do so when installing a new major version, though maybe not necessary. After starting Firefox for the first time the folder will be recreated and you can copy your bookmarks to the new profile (just copy over "bookmarks.html" from "...\Mozilla_old\Firefox\Profiles\13245678.default\" to the corresponding new folder). Apart from some new eyecandy I'm beginning to appreciate the new spell checker while writing this. This is really a neat new feature!!! Also new is the "phishing protection". You may choose if Firefox should compare URLs to a downloaded list or by asking a site like Google. We'll see if this will do any good. I personally prefer the first method as I'm having no good feeling about telling Google every site I'll look at... ;-) 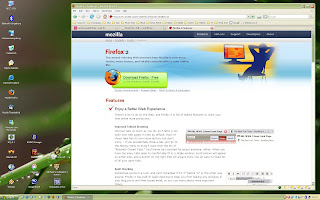 I'd like to write a short HOWTO on installing SuSE Linux 10.1 for amd64. It's how it worked for me and my computer and doesn't mean to be THE way.

So first of all grab the DVD image from here, which also includes the non-opensource software like Adobe Reader, Real Player and Flash-Plugin. SUSE just released an updated version called "remastered" which comes with all updates since the initial release. Don't forget to compare MD5 sums (for Windows: use MD5summer) and then burn the iso to DVD with your preferred software. Once you've set your BIOS to boot from DVD-drive, insert DVD and up we go!

The installation starts with SuSE's "yast2" asking some easy questions like preferred language, time-zone default desktop (KDE 3.51 or Gnome 2.12), etc. If yast2 has finally gathered the required information all settings are summed up. There's an "Expert" view of all settings which you should use to adjust some of the default settings (just by clicking on the corresponding title).

I got my computer about a year ago and assembled it myself. Though I like playing around with hardware from time to time, I'm always really glad when it's all done - and working! So here's what I have (only main specs):
The watercooling system really does it's job! CPU as well as GPU temperature won't go above 40°C and tend to be around 30°C most of the time. That's the good part... but it's really annoying if you like to change your hardware a lot.

I found the XFX video card more or less accidentally as I never heard of that company before. The video card is very well manufactured and solid. It has a bar added on top of it which stabilizes the board and allowed me to attach the watercooling heatsink a lot stronger compared to my former Gigabyte board. I think, if it's time for a new video card I'll take a look at XFX first. I always prefer nVIDIA boards over ATI, because the Linux support concerning the installation of their drivers is a lot better at nVIDIA.

The Asus board was a bit of a disappointment at the beginning, because the chip fan broke after two weeks. Looking at some forums I found out that this was a "normal" behavior of this chip fan. That's not Asus-worthy!!! So I had to disassemble my computer (and of course the watercooling system got in my way...) and change that chip fan. As the nForce4 northbridge needs good cooling, I bought a bigger heatsink and attached a small (but more quiet) fan to it. Work's like charm! That was about the only thing I could complain of.

Email ThisBlogThis!Share to TwitterShare to FacebookShare to Pinterest
Labels: Hardware

As I already mentioned I recently changed from Ubuntu to SUSE. Why? To sum it up: I was up for a change! :-) And I liked the way SUSE integrated 32bit Software into their 64bit OS.

Ubuntu is one of the best distros I ever used (and maybe will again). The installation is quick and simple and no package-management can compete with Debian's apt. And this is the main weakness of SUSE: Novell's "ZENworks" package-system is a piece of sh... But there are ways to work around that issue. So here is a short and of course personal comparison of those two distros with pros and cons (always in mind that I'm talking of the 64bit version):

With "SuSE Linux 5.3" I gave Linux the first try. I just got quite familiar with Windows 95 and was up for something new. I didn't really know what I was doing but the installation went pretty well - but no X-Server was working with my system... OK, that was it! ...until "SuSE Linux 6.3". I actually got X working and even my soundblaster. For the latter I had to "recompile" the kernel. Again, I had no clue what I was doing, I just followed some instructions I came across via Google. I still preferred using Windows for every day work. This changed a bit when I bought "SuSE Linux 7.2", which worked out of the box! The follow-up version 7.3 was a disappointment, I had a lot of trouble with it and the same goes for 8.x, so a I changed to "Mandrake 8.2" (which is Mandriva today) and that did hit the spot! Everything worked great and me being still a noob could manage this distro very well and so I followed Mandrake until version 10 and it became may main OS. I learned quite well the "ways of Linux" and like every time something works really good, I needed a change and my new distro of choice became "Slackware 9.0". I have to say, that this is one of the best distros I ever came across. It's very straightforward and simple. If you want to configure something - well, just edit the appropriate conf-file! I stayed with Slackware until Version 10.1. I became a bit lazy and had an eye on Debian for quite a while. Debian "woody" being a bit out-dated I tried "sarge", which was "testing" then. It worked like charm and once you learn how to use "apt", you'll really appreciate the large amount of software which is right at your fingertips. Then I changed my hardware to 64bit an I wanted a 64bit distro. The Debian 64bit trunk wasn't supported and with "sarge" being stable by now, I had to go with "etch" which was "testing" - and that a lot! So I changed to Ubuntu for amd64. That was kind of Debian, but working. ;-) And I still had apt package-management! I used Ubuntu 5.04, 5.10 and 6.06 and I liked it a lot. With 6.06 the installation of some 32bit software (flash, java-plugin) became a bit easier, but it still was something which could have worked nicer. So, again I changed: this time back to SuSE which is now owned by Novell. I'm writing this running SUSE 10.1.
Written by gerrit um 2:07 PM No comments:

Email ThisBlogThis!Share to TwitterShare to FacebookShare to Pinterest
Labels: Linux

So, now I started this blog. Let's just wait and see what kind of wisdom it'll bring to the world. To be honest, I already know: it'll be mostly about computers and stuff! ;-) 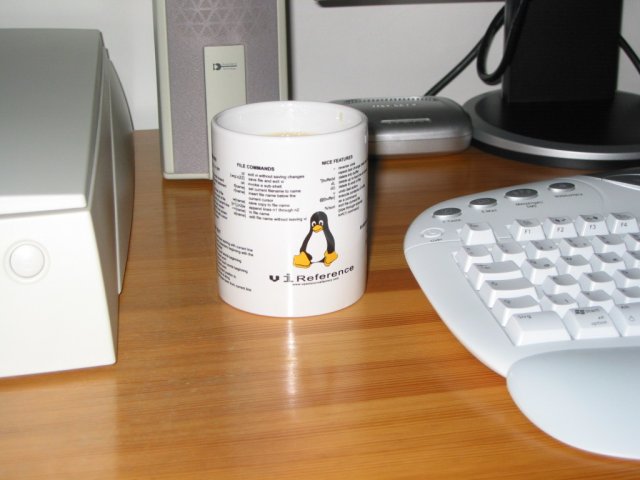 This is my coffee mug, very helpful if I need to use vi...